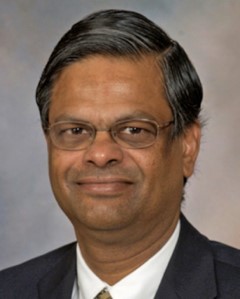 Dr. Suresh Chari is a professor of medicine in the Department of Gastroenterology, Hepatology, and Nutrition at MD Anderson Cancer Center (Houston, Texas). He was formerly at the Mayo Clinic (Rochester, Minnesota), where he was the director of the Pancreas Clinic, a councilor and a past president of the American Pancreatic Association, and a councilor of the International Association of Pancreatology, of which he is now president. His NIH-funded research has focused on new-onset diabetes as an early marker of pancreatic cancer, and he is currently the principal investigator of the EXPAND trial, the first prospective screening study for sporadic pancreatic cancer in subjects with new-onset dia¬betes. He is also leading the national NIH Consortium to assemble a cohort of 10,000 subjects with new-onset diabetes. His clinical research has covered a complete range of pancreatic diseases, including tropical chronic pancreatitis, autoimmune pancreatitis, pancreatic cancer, and cystic tumors of the pancreas.